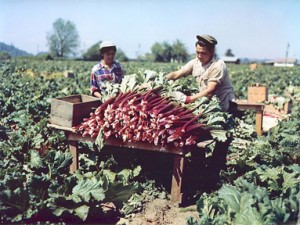 There are three common varieties of rhubarb—one field variety and two kinds of hot-house rhubarb that follow in the footsteps of Henry Knoblauch and old Farmer Dodson.

The first variety is Victoria, which is very delicate and milder, a crimson satin variety.  It grows in hot houses and is no good in fields.  These would go in the middle of December.  Hazel Knoblauch Freehe explained that some farmers put it in too early, thinking they would beat the market, but it didn’t work because they were putting it in before the root went into complete dormancy.  If forced too fast, farms lose the color. 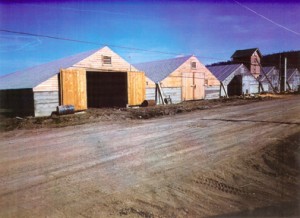 To get new plants, farmers cut up roots, always making sure there is an eye on each piece.  The plants are grown outdoors for three years to establish the new roots.  Then, the leaves and stalks get mowed off, and the farmer digs up the crowns (roots), which usually weigh 70-100 lbs each.  The roots, or crowns, are in big hunks of earth.  Farmers put them in the hot-house beds, washed them down, and turned the heat on. Originally, hot-houses were heated by pot-bellied stoves full of wood, but farmers had to get up throughout the night to replenish the stoves.  Now, hot-houses use furnaces. The lights are shielded to keep the hot house as dark as possible.  This helps the plants put their energy into the stalks instead of wasting it in leaves.  In fact, hot-house rhubarb have small, yellowish leaves and bright red stalks in contrast to field rhubarb that features broad, green leaves. 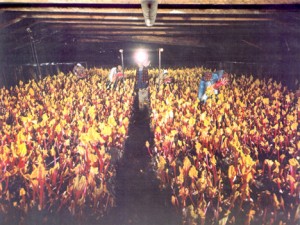 Farmers start pulling stalks from Victoria plants in the 1st or 2nd week of January.  They keep pulling new stalks until the plants are done.  Then, they clean houses and replace with the next variety. Next comes the German Wine variety, called “refills” because they refill the hot houses around the middle of February through March.  This variety takes more sugar in baking: it’s grainier and more tart.  Farmers can pull this variety into early June.  When grown outside, this variety is more green but it grows red when in a hot house.

The third crop is the field crop called Crimson.  This variety tends to rot if forced in hot houses.  In the field, the farmer doesn’t have to force Crimson to get color and could pull stalks for years and years if the plants are fertilized well.  Pulling stalks weakens the plant, so farmers need to fertilize to build that strength back up.  If farmers pulled stalks too late in the season, it takes too much out of the plant, and the plant comes on later the next season.  Most don’t pull into August. 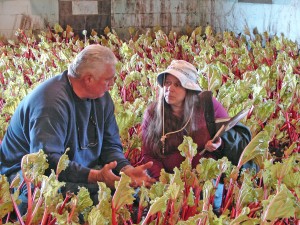 There was another variety called “strawberry rhubarb,” but it never became too popular.  Also, Newt Johnson propagated a new variety called Johnson Red.  In nearby Firwood, an inspector told Johnson about this new variety at the experimental station.  Johnson went and bought them, cut them up and replanted them over and over until he had enough to sell.  He lived north of town and went to school in Sumner.