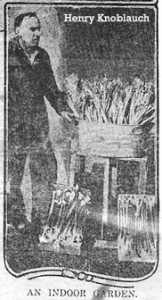 Rhubarb originally came from Eastern Europe, where its name came from a word meaning “barbarians of the Volga River.”  It was consumed by Germanic people in Europe while in China, it was used for medicinal purposes as early as 2700 B.C.

In 1893, Adam Knoblauch shipped the first field rhubarb to Seattle in gunny sacks.  Ben Benthien of Fife had the first wine and strawberry roots that he shipped in from Germany.  Henry Knoblauch, Adam’s son, was the first grower of commercial hot-house rhubarb in the Sumner area.  He was going down the road one day and saw smoke coming from a root shack of an old German farmer named Bill Dodson.  Henry wondered if Dodson was smoking salmon or what and found out that he was forcing rhubarb.  So, Henry went home and built a 12’ x 24’ hot house on his farm on Wahl Road. In 1914, he put roots in, cut them up and sold it commercially.   Albert Knoblauch, Henry’s brother, delivered this first hot-house rhubarb to Tacoma and Seattle in a Model T Ford.  From there, an industry boomed.

Other early rhubarb growers included Charles Orton, Jacob Stelling, Warren and Charles Ryan, Fred Mattson, J.A. Forehand and Bill McClane.  In 1919, Leslie Brothers started their rhubarb farm in the Valley.  One of the brothers, John, retired the farm to his son Allen and daughter-in law Winona.  Allen’s son Ron eventually took over the business, and today, he continues the farm with his son Nik.  They are now known as Leslie & Son. 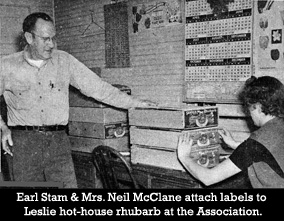 For many years, there were two growers associations involved with rhubarb.  Puget Sound Vegetable Growers organized as a cooperative in 1924 with rhubarb as one of their major products.  The other group started in 1926 and then reorganized in 1930 as Sumner Rhubarb Growers Association, a corporation with Fred Mattson as the manager and Bill McClane as secretary.  In 1937, Henry Knoblauch went on a sales trip that took him all over the country, including the Kansas State Fair, where he passed out pamphlets encouraging Sumner rhubarb.

Many of the farmers in 1900s were of Japanese descent.  During World War II, several were sent to internment camps.  Their neighbors rented out their farms and kept them going in their absence.  At the end of the war, some Japanese families chose not to return, but many did come back to take up their farms again.  After the war, though, farmers of Japanese heritage took their rhubarb to the Puget Sound Vegetable Growers.

In 1954, Henry’s son Clayton and his wife Hazel returned to the family’s farm to build two new large rhubarb hothouses.  Hot houses were traditionally 20-24’ wide with wood-burning pot-bellied stoves to provide heat.  The Knoblauchs were the first to build them 60’ wide by 100’/110’ with furnaces instead of stoves. 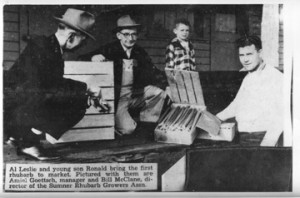 It was during this time that the Sumner Rhubarb Growers increased their national visibility.   Amiel Goettsch took over as manager of the association in 1948, but he refused to travel.  The farmers knew they had to get a man on the road to be successful.  George Richter lived in Puyallup and was big into field rhubarb.  He used to travel independently to promote his crops.  Hazel and Clayton plus George and his wife went all over Washington and into Idaho, trying to recruit for the job.  They talked to men working in the produce departments of Safeway, but no one wanted to leave their stable job.  Finally, Clayton told George that he should do it, so George turned his farm over to his son Ed and worked promotion for Sumner Rhubarb in 1956 and 1957.  By the late 1960s/early 1970s, Sumner Rhubarb Growers had the distinction of hosting the American Rhubarb Growers in Puyallup.

In 1957, the two associations took their first step toward working together when they combined their promotion and marketing into the Washington Rhubarb Growers.  However, they would still maintain separate financials and organizations for many more years.

Clayton was president of the Sumner Growers from ’63 to his death in ’65, and actually in 1965, he was both president of Puget Sound Vegetable Growers and Sumner Sales Director.  Hazel had 14 hot-houses to run by then.  In 1966, she went to work for the Sumner Rhubarb Growers, and stayed there for nine years until her retirement in July of 1975. 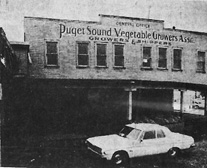 Finally, in late 1974, the two associations merged completely into the Washington Rhubarb Growers Association that we have today.  At that time, less than 60 remained of the Puget Sound growers, and they were mostly growing rhubarb.  Min Terada had served as their manager since 1958.  The association’s directors were Tom Shigeo (president), Mike Oto, Frank Komoto, Joe Nishimoto, Min Uchida, George Yamamoto, Joe Clerget and George Kawasaki.  Their secretary, Mrs. Gloria Hubner, continued working after the merger.  Of the Sumner Rhubarb Growers, there were 37 active members and 50 capital stockholders at the time of the merger.  Hazel set up the books for the combined merger before her retirement, and Dick Craig came and trained for the manger’s position, taking over George’s place at the end of 1975.

Today, the association has only a handful of farmers left, and the rhubarb now travels by trucks rather than train.  However, families such as the Leslies are still growing and farming, and the majority of rhubarb in the country is still grown around Sumner in the Puyallup Valley.

There are no upcoming events.